Finally Got To It

﻿
﻿I've had the car since fall of 2008, but this weekend I finally got around to installing a real radio.  I've been a Ham Radio enthusiast since as long as I can remember.  My father was licensed long before I was born and as a very active member to the radio community, I went with him on many events.  From hamfests to ARES activations, ham radio has always been a part of my life.

I don't do a lot of recreational operating; I simply don't have the time, but I do enjoy DXing or doing a DXpedition when the time presents itself.  Mostly though, I chat with other hams when I am driving (which is still much better than using a cell phone while driving, since you only have a mic and don't hold a phone against your head the whole time) and make myself available to ARES when there are emergencies.  My first ARES participation was the tornado of 1979 when it swepth through Windsor Locks, CT at Bradley Field Airport before I was licensed.  I assisted my father with carrying equipment and doing whatever I could to help.  Later, after I got my own license I operated during Hurricane Gloria when it went over Connecticut.  More recently I spend a week in NYC after the attacks on 9/11 working communications at shelters and for the Red Cross headquarters in Brooklyn (when large portions of the cellular network went offline for days).

Ham radio is also very useful when traveling with a large group of cars where cell phones, amusing as they might be, are not ideal.  Or when traveling where there is little or no cellular service.  I know to many people this is something they don't quite comprehend, but I find myself driving with zero cell service quite often, actually.  Offroading (or overlanding) is the best example of that.  Heading "off the beaten path" with a group of 4x4s for the enjoyment of a long trip is quite an experience, but it does cause some communications challenges.  While a CB works well on the trail, it really only works if the vehicles are within sight of one another, and FRS radios have even less range.  With ham radio, however, I can transmit over hundres of miles or further, depending on what frequency I use and what power I have available to me.  CBs are limited to 4 watts; FRS to less than one watt, but my "offroad rig" is 100 watts, and most of the radios I have are 50 watts and I have many different frquency bands to work in.  With available power and multiple bands to choose from, I can literally communicate around the world if necessary.

So while many people snicker a little bit at having a ham radio in the car in this day of digital cell phone coverage, I have found many times that the ham radio, simple as it might seems, still very much serves a purpose; communications when all other options aren't available.  It (almost) always works. 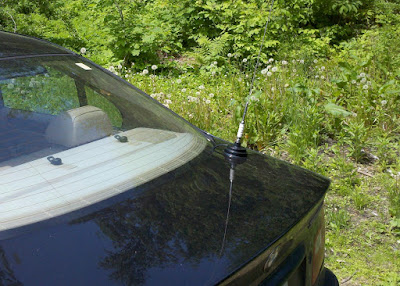 I will say though ... I have to get a different antenna installed on the car.  The 5/8th wave 2meter antenna on the mag-mount, while a very good antenna, is a bit much for a small car.  I would quite like to have 440 on the car as well, so I think I will be installing a 2m/440 glass mount antenna.  Simply more appropriate to the vehicle.
Newer Post Older Post Home