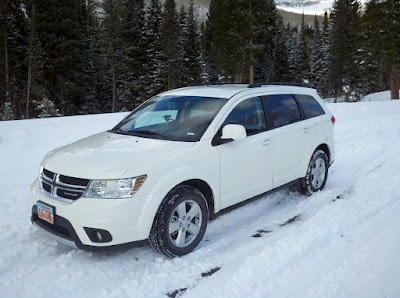 Someone said to me recently that “crossover is marketing speak for station wagon.” This vehicle is one of the reasons that opinion exists. Oddly, in a world where a BMW M5 Touring exists, when someone says station wagon images of a Buick Roadmaster seem to be what comes to mind most of the time. There are some pretty amazing station wagons out there to choose from, but the engineers that designed this vehicle didn’t use any of them as their inspiration. It does appear, however, that the designers used a mini van for a good portion of their design. The Journey carries a lot of body lines that appear to be part station wagon and part mini van with a little all wheel drive added for effect. The end result has its positives and its negatives.

For starters, it definitely handles far better than the last two vehicles I’ve tested, both of which were big full size SUVs. It might not be sporty, but when I turn a corner it doesn’t make me seasick as it wallows and sways on its suspension. On that note, however, it’s still a crossover, so it’s not exactly sticking to the road, either. When taking corners at speed the vehicle wants to heal over a little more than is entirely comfortable. Another artifact from it’s heritage are the A-pillars which are far too big. Never mind hitting the apex of a corner, you can’t find it through the ancient oak sized pillars which are rather inconveniently creating blind spots you could lose another car in, never mind the curb.

The transmission has a manual mode, and it’s far better than the last two manual mode automatics I’ve tested lately. In this case the shift lever drops from D down into a channel where the shifter goes side to side for +/- on the gears. While I prefer a front to back motion for sequential shifting, at least shifting is achieved through motion of the shifter, and not by using little rocker buttons on the shift lever which are almost impossible to use when driving fast; exactly the kind of time one would want to be using a manual mode. In the Journey, the manual is easy to use and functional. The only problem I’ve found with it is that the ratio between 3rd and 4th gears is a little too wide.

Probably the biggest surprise of the vehicle is the engine. This is a baseline all wheel drive Journey having very few interior options, but the engine seems to be able to move that vehicle right along. I took it up a winding mountain road and it accelerated and engine braked quite well. It was on that mountain road that I was able to test the transmission’s manual mode. While I am certain that a decent manual would have been better, it shifts quickly, the engine quickly responded with power or with braking, and it was actually almost a little fun to drive.

From a comfort and ergonomic standpoint the vehicles is reasonably comfortable and all the controls are easy to access from the driver’s seat while driving. The only real problem I’ve found is with the dash. It has a strange little bump at just the right height so that it digs into my shin while driving. This is extremely inconvenient and requires that I set my leg in a fairly odd position which inhibits one of the drink holders. Very strange design.

If you can overlook the minivan heritage, aren’t 6’6”+ and run afoul of the poor dash design and don’t mind the lack of a manual transmission, this vehicle is probably one that would be worth driving every day. The looks aren’t particularly inspiring, but other than the dash problem, it’s fairly comfortable, has a reasonable amount of room inside for the whole family and with a little attention to the suspension could actually be quite enjoyable to drive.