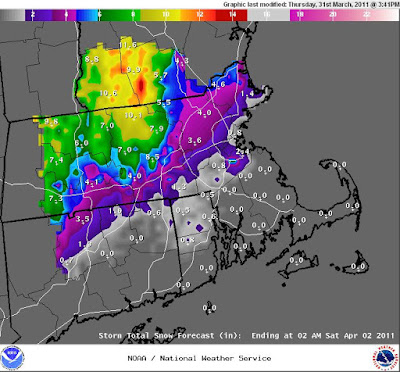 Shades of the 1997 April Fools Day Blizzard coming at us, it appears.  I remember that blizzard quite clearly, as I was driving into work that morning.  After a few hours of attempting to get to work I turned around and went home; probably one of my better decisions at the time.  While it doesn't look like this blizzard is going to quite match 1997, here we are once again, staring at a Nor'easter coming in on April 1.

This time is a bit different though.  In 1997 the biggest hit was around the Boston area, whereas it appears (if the prediction map is correct) that the Monadnock Region in New Hampshire will probably be feeling the brunt of the storm this time out.