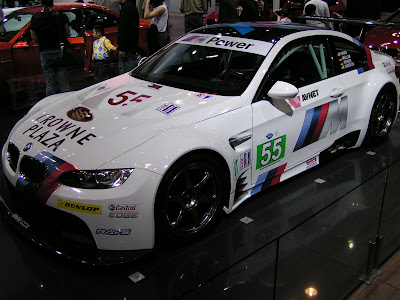 We took the day Saturday for an excursion to the New York International Auto Show.  Perhaps I should refer to it as the auto slow, that might be more accurate.  Or perhaps simply pathetic (but on that in a moment).  We wanted to check out some new cars, some cars that we would otherwise probably not be able to get close to and to see the Car 2 exhibit.  We drove from home to New Haven, CT, where we grabbed a Metro North train into Grand Center Station.  From there a quick walk got us to the Javitz Center and the first thing I noticed is that the once great convention center that I had gone to many a Linux World conferences at looked rather long in the tooth.  Downright ratty, if I'm honest.  In through a makeshift entrance designated with portable chainlink fence and some tents, it was more like entering a refugee camp than a convention center.  Inside it was a bit better, but there was evidence of this wear and tear inside as well.  Not only was the place pretty rough, but the layout made little sense as well.  Nothing was straight forward, to say the least.

Undaunted (since it wasn't the building we were there to see) we made our way to the Car 2 exhibit in the fourth floor galleria.  This, I have to say, was dreadfully pathetic.  Two static models of Lighting McQueen and Finn McMissle (life size, admittedly) and a TV screen playing the movie trailer.  That was it.  The two cars were roped off so no one could get close to them too.  It was a total letdown.  There wasn't even any schwag to be collected or even purchased.  Eleven seconds and the exhibit was behind us.

So, we moved on to the real cars.  This was slightly better.  We managed to check out some of the new Mini models as well as BMW and Jeep; oh, and Porsche.  The kids rather liked the 911 Cabriolet.  They have good taste, to say the least.

One big plan we had for this trip was to check out the latest models from BMW.  We are looking for a new family car; something I can drive comfortably and the kids will still have legroom in the backseat; specifically behind me.  After trying a few on for size, we found that the 5-Series GT has plenty of rear seat legroom, lots of room for me to drive comfortably, and a big enough trunk to carry all the luggage we would need for a long weekend trip.  The thing I liked the most about it was that the rear seats recline.  For those times when the kids fall asleep in the car it would be very nice.  None of that Jello neck head bob thing giving them headaches and sore necks when they wake up.

The 5-Series GT isn't going to win any beauty contests, but in terms of functionality, I think it could be a real winner.  The only downside to the vehicle is that it is only available with an automatic transmission.  I hate automatic transmissions; they aren't any fun to drive.  That said, however, a family car isn't about performance driving.  It's about getting the whole family from point A to point B safely and comfortably.  I think I can live with the automatic in that particular car.

My wife was able to check out the new Jeep Grand Cherokee Overland.  She currently has a 2002 Overland and she loves it, but it's getting to be quite high mileage and a bit long in the tooth.  It still has a few years in it, but knowing that the time is coming, she wanted to see if the new one was as good as the old.  As it turns out, she actually likes the new one a bit more; it has all of the positives of the WJ model, but with a few new added extras that really make it.  She's pretty sure she's going to get one when the WJ finally wears out.

We also checked out a few vehicles just for the fun of it.  The afore mentioned Mini was the first of the distractions, but I also really enjoyed checking out the FIAT 500s.  Now the 500 is an amusing car, but probably not for the reason one might think. 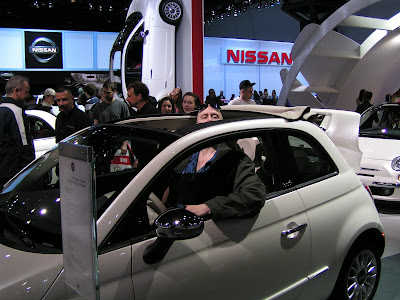 Yeah, I don't think the 500 is really an ideal choice for me.  Pity, it's a nice little car.  Rather a bit larger than the original, though, I must say. 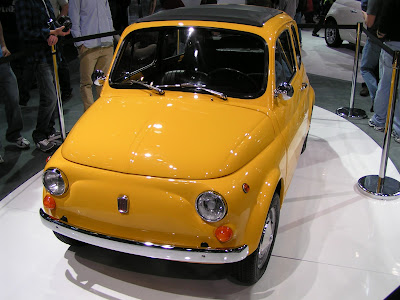 We wandered past a few of the exotic cars and really didn't spend much time.  I love old Lotuses, but the new Lotus (Lotus Cars, that is) seems to have lost site of Colin Chapman's philosophy of "simplify, then add lightness".  Lotus seems to be putting far too effort into competing with the likes of Ferrari and keeping their cars behind barriers so you couldn't get near them.  It was the same with all the exotic cars; they were all behind barriers so you couldn't really get close to them.  Apparently it was enough (in their opinion) to merely be in their presence.  Oddly, I find that rather droll.  Oh well.  A quick view of Mercedes' offerings as well as those of Porsche (who did have their cars where people could really check them out),  a glance at the Red Bull F1 car (on display at Infiniti) and we were heading out the door for lunch.

At the end of it all, my favourite car was, of course, one of the BMWs.  The ALMS M3 competition car. 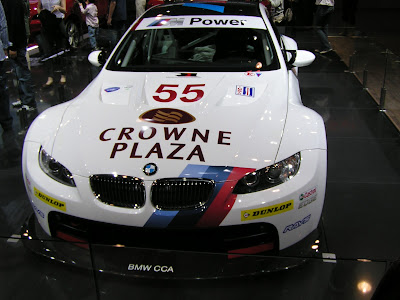 In all the show was useful, but it was hardly compelling.  The day was saved because a very good friend of mine and his wife (who live on Long Island) grabbed a train into the city and joined us for the day.  It was great to spend the afternoon with them.  The hour we spent grabbing lunch at a little cafe (which really didn't have anything for the kids, but we made it up to them by stopping at Sonic on the way home) and then wandering through a street bazaar made up for the lackluster show.

I'll probably return next year, since it's closest large auto show to New Hampshire ... but really I think I would rather make my way to the Geneva or Paris shows.
Newer Post Older Post Home